The 'totally missing the point' disaster

Year 8 pupils were given a practice exam question designed by the AQA exam board which was modelled on the style of GCSE paper pupils will face at the end of Year 11. The pattern is usually the same for this paper (Paper 2 of the GCSE Language examination, see http://www.aqa.org.uk/subjects/english/gcse/english-language-8700/scheme-of-assessment#Writers_viewpoints_and_perspectives). For this paper pupils are given a passage of non-fiction from the 19th Century and are asked to compare aspects of it to a more modern piece of non-fiction writing (in this example an article published in the Guardian from an advocate of zoos). The 19th Century passage the Year 8s were asked to read was the following extract taken from an essay written in 1893 by Edward Frederic Benson about what he witnessed at London Zoo: 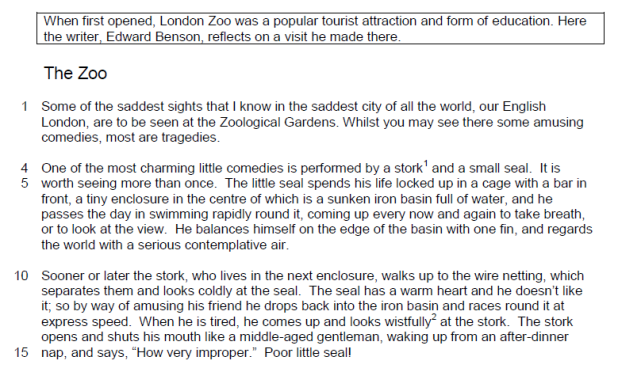 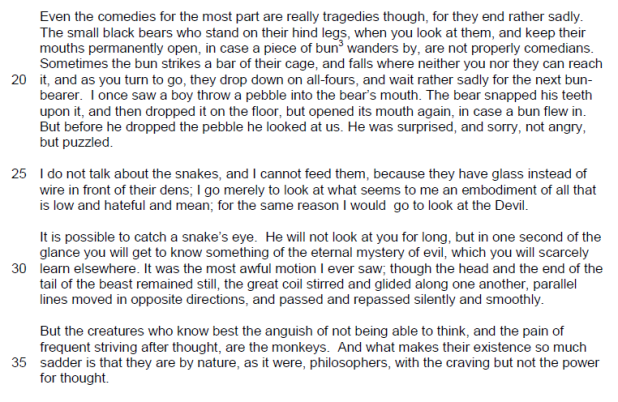 The question title was ‘Use details from both sources to write a summary of the different enclosures’. I have omitted the Guardian article for copyright reasons though you can follow this link to the original article:  https://www.theguardian.com/science/lost-worlds/2014/aug/19/why-zoos-are-good These two answers, copied verbatim, came from two pupils of differing abilities and show how disastrous it is when pupils do not understand what they have read:

The enclosures at the Masai Mara and at the London Zoo have their differences.

The Masai Mara is a zoo in Kenya. Kenya is not a very well developed country, so having to pay for a zoo would be a lot. A lot of the children there (and maybe even adults) might never have seen any animal after a fox or a pigeon.

The London zoo is in a country which is much more developed than Kenya. It would be easier to pay for the zoo as England has more money. At this zoo you can experience amazing connections between the animals at the zoo. Sometimes you might even see animals ‘being rude’ to each other, you could even see animals fighting.

At this London zoo you can experience unseen reactions with animals. On the other hand at the zoo in kenya it would be quite quiet, because a lot of people in kenya probably cannot aford to go to a zoo, so it would be almost dead silent.

Overall the zoo in London gets approximately 1000+ people a day, compared to Masai Mara where they might get around 50+ tourists a day.

However, in Source A that the zoo is better, despite the terrible conditions, because in the zoos, the animals do not feel the threat of predators anymore. This is because of their restricted movement. Thirdly, in Source B the writer says that, because of the way the animals are kept in captivity, looking at them once you will get to know something of the eternal mystery of evil.

Finally, in Source A the writer that because so many animals are separated at the zoos, they do not get to reproduce, meaning many of the animals are near extinction. Finally in Source B the writer says that it is sad for the monkeys existence because of the way that they are treated by ‘philosophers’.

What is really interesting about both these answers is that they are adequately well written (remembering what I said about training pupils like performing monkeys in the Lack of Time section of this page Problems Teachers Face) but show an absolute failure to understand the tone of the passages or why the writers have written about the topic of zoos in the way that they have. In the 1893 passage the writer is using a scene he has witnessed in the zoo as a starting point for imaginary interaction between two of the animals. The stork stares snootily down at the frantic swimming of the seal which the writer imagines the seal doing for the ‘entertainment’ of the stork. Benson uses this to illustrate the tragic nature of the animals’ situation and to highlight the unnatural conditions in which they are kept. In the modern article the writer is trying to defend zoos from a number of accusations that are often levelled at them by listing the good that zoos can do and by emphasizing how modern ‘reserves’ like the Masai Mara differ from the traditional perception of animal enclosures.

Neither of the answers above shows any understanding of the difference in historical context. Answer 1 assumes that the animals are actually behaving like people (“being rude” to each other) without understanding that this is the writer imagining this anthropomorphic scenario to make a point. Pupil 1 has also missed the sadness of the interaction between the animals, thinking instead that the writer enjoyed experiencing ‘amazing connections between the animals’. This pupil has also drifted at times in to Geographical observations about the countries in which the different enclosures are based and has muddled up the writer’s statement about how ‘a lot of the children there (and maybe even adults) might never have seen any animal after a fox or a pigeon’, thinking this refers to Kenya (which it doesn’t).

Answer 2 has similarly misinterpreted the information in the 1893 passage: instead of understanding that the animals have become used to ‘begging’ for scraps from zoo visitors who treat feeding the animals with highly inappropriate foods as a form of circus show, this pupil says ‘the writer says that he is not able to feed some of the animals because of the way in which they are enclosed’. This misses the point completely. The writer is not sad that the enclosures prevent him from feeding the animals for his own entertainment; instead he is hinting at the poor treatment the animals receive at the hands of both visitors (boys throwing stones at the bears trying to ‘trick’ them into thinking they are bits of food for amusement) and the zoo itself (why are the animals so desperate to eat whatever the visitors throw at them? Are they not being fed properly by the keepers?). Answer 2 then misunderstands the reference to ‘philosophers’, suggesting the pupil does not know what this word means, and misses the fact that the monkeys themselves are being called ‘philosophers’ because they appear to think about the world, saying instead “the writer says that it is sad for the monkeys existence because of the way that they are treated by ‘philosophers’”. Pupil 2 has noticed that the monkeys’ situation is ‘sad’ but does not correctly understand how the writer has conveyed this.

Now, the language in this passage is undeniably difficult but the ideas themselves are not. A Year 8 child faced with this text unaided will inevitably struggle with it, but it is, nevertheless, of the realistic level expected by an exam board at this age (this question comes from practice sample material aimed specifically at Year 8 in preparation for the beginning of the GCSE syllabus in Year 10). Therefore we need to equip pupils with the skills and vocabulary to ensure a better understanding and this comes from repeated, accumulating practice.